Meghan Markle and Prince Harry bought a website in the name of ‘Lili Diana’ almost a week before their daughter’s birth and ‘Lilibet Diana’ on the day she arrived – all before getting approval from the Queen about using her pet name, it emerged today.

Four days before Lili was born in California the domain LiliDiana.com was registered on May 31 followed by LilibetDiana.com on June 4 – the day their second child arrived.

The public announcement of Lilibet Diana’s arrival came two days later. Harry insists he spoke to his grandmother about the name ‘in advance of the announcement’ but has not been specific on when that exactly was.

A spokesman for the couple told The Telegraph: ‘As is often customary with public figures, a significant number of domains of any potential names that were considered were purchased… to protect against the exploitation of the name once it was later chosen and shared.’

The statement suggests that had Her Majesty refused to allow them to use Lilibet they would have gone for another name amongst the ‘significant’ number of domains they bought before the birth.

‘Lilibet’ was first used by the then Princess Elizabeth when she was unable to pronounce her own name. Following claims by the BBC that the Queen had not been consulted, Harry and Meghan’s lawyers said it was ‘false and defamatory’ to suggest they did not discuss using the name with Her Majesty.

As the row over Lili’s name rumbled on, it also emerged today:

It came as The Times reported that the Duke and Duchess of Cambridge did not hold any meetings with Prince Harry after Prince Philip’s funeral because they feared any details would be leaked. They spoke briefly while walking from St George’s Chapel.

Royal historian Robert Lacey said: ‘They told friends that they could see no point in talking to Harry since any discussion of substance would go straight back to Meghan to be leaked via Oprah [Winfrey] or some other tentacle of the Sussex network.’ In an updated edition of his Battle of Brothers book, Lacey also revealed the reason Meghan walked out of a UN event in Fiji was because she resented being an ‘advocate’ and not a ‘goodwill ambassador’.

On the same day the website in her name was secured, according to a public registry of domain names.

The Sussexes announced her birth and name at 5pm on Sunday June 6, UK time, meaning only close friends, family and aides will have known the news when the URL was set up.

It was bought up via US company Domains By Proxy, which calls itself the Internet’s very first privacy service and charges people a fee to buy up websites for anyone who does not ‘want their personal information available for everyone to see’.

As a result the owner of lilibetdiana.com is not contained on the ‘Whois’ record – a register that shows the owners of the world’s websites.

Today the Sussexes confirmed it was them. And it emerged that they had  bought LiliDiana.com four days before her birth.

Earlier this month the couple launched an unprecedented legal attack on the BBC after the corporation claimed the couple did not ask the Queen if they could name their daughter Lilibet.

In an extraordinary escalation of their war on the UK media, Harry and Meghan instructed lawyers to contest comments from the BBC’s ‘palace source’.

The couple said it was ‘false and defamatory’ to suggest the monarch had ‘never been asked’ if they could use her nickname and said the claim should not be repeated.

The BBC, although not commenting publicly, appeared to be standing by its story, which was still up on its website and the segment ran in most of its main news bulletins.

It is not clear whether the couple intend to take the matter to court, as they have done twice previously in cases against the media.

Buckingham Palace has refused to comment, but is notably not denying the BBC’s story that Her Majesty ‘was never asked’ about the couple appropriating her pet name.

One well-placed insider told the Daily Mail that the couple’s decision to use Lilibet was ‘a classic example of their conviction that everything they do is right but deliberately misconstrued by the forces out to get them – and yet totally tone-deaf to the realities of the situation’. 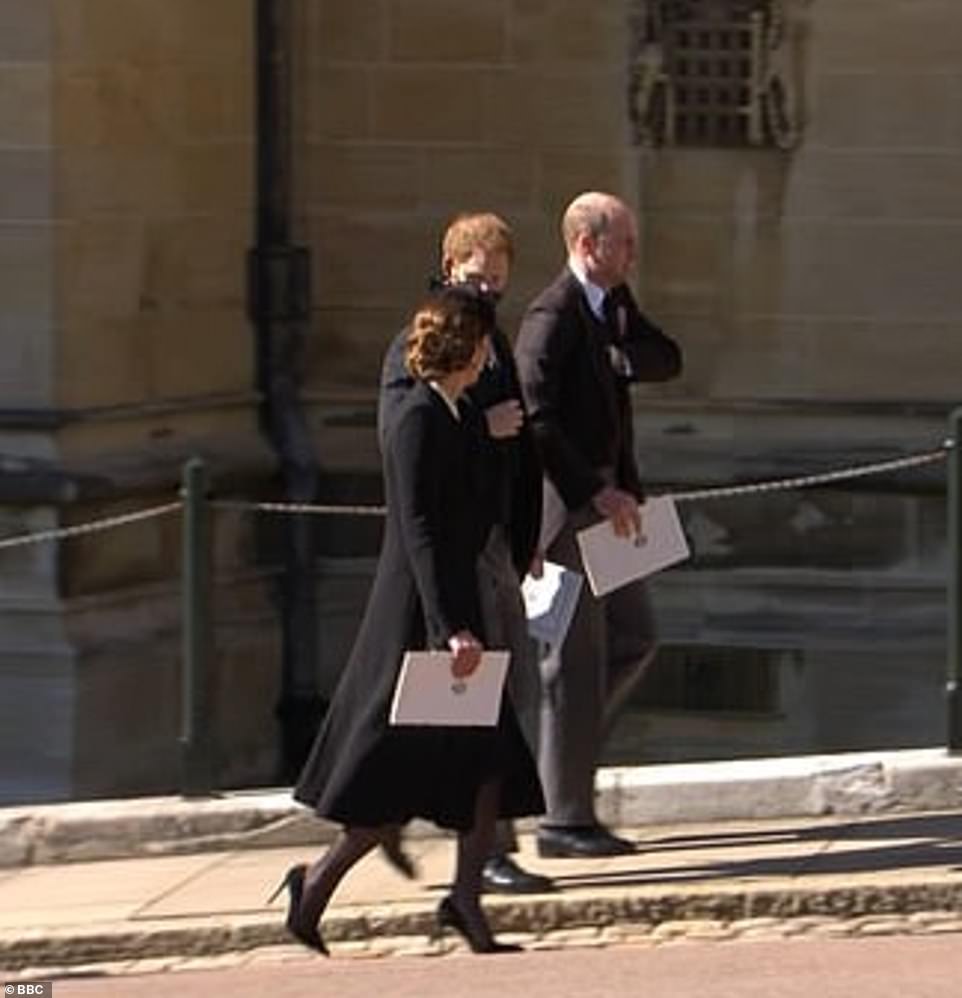 The Times reported that the Duke and Duchess of Cambridge did not hold any meetings with Prince Harry after Prince Philip’s funeral because they feared any details would be leaked. They spoke briefly while walking from St George’s Chapel.

The row was triggered on Radio 4’s Today programme, when royal correspondent Jonny Dymond said he had been told by a ‘palace source’ that the Queen had not been asked by the couple about naming their daughter Lilibet.

In a report, which was backed up by a longer story on the BBC’s website, he said the source strongly disputed reports that Harry and Meghan had spoken to the Queen before the birth.

Mr Dymond said his ‘good palace source’ was ‘absolutely adamant’ the Queen had ‘never’ been consulted. But his report also highlighted the fact that a ‘source close to the Sussexes’ had told the BBC directly that Harry had spoken to the Queen ‘before the birth’ and ‘would have mentioned the name’.

The aide behind the Palace leak to the BBC is unknown, though it is thought to be a senior official. It’s also unclear if the Queen was aware of the comment, though it is considered almost unprecedented for the monarch not to sign off on quotes from senior officials, even if they are anonymous briefings.

Despite it being 1am on the West Coast of the US, Harry and Meghan’s California-based PR team briefed chosen media.

The couple’s biographer Omid Scobie tweeted: ‘Those close to Prince Harry confirm that he spoke to close family before the announcement so perhaps this report highlights just how far removed aides within the institution (who learned of the baby news alongside the rest of the world) now are from the Sussexes’ private matters.’

Shortly afterwards, the couple issued an on-the-record denial, saying: ‘The duke spoke with his family in advance of the announcement [of Lilibet’s name on Sunday], in fact his grandmother was the first family member he called. During that conversation, he shared their hope of naming their daughter Lilibet in her honour.

‘Had she not been supportive, they would not have used it.’

Critics seized on the words ‘shared their hope’, saying it did not confirm that the Queen had a choice in the matter, either being formally consulted or asked for her blessing. And the Sussex PR team did not clarify when they informed the Queen – before or after the birth.

The denial was followed up by a legal warning to the media from the couple’s London-based firm of solicitors, Schillings, which accused the BBC of libel.

It described the story on the BBC’s website as ‘false and defamatory’, adding that ‘the allegations within it should not be repeated’.

The extraordinary row exploded after days of claim and counter-claim over whether the Queen had been consulted or just informed of her new great-granddaughter’s name and when.

Harry and Meghan stepped down as senior working royals in early 2020 in a quest for personal and financial freedom after struggling with royal life. They have signed multimillion-pound deals with Netflix and Spotify, and set up their Archewell Foundation.

In February last year, a month after they emigrated, the Queen ordered they must drop their ‘Sussex Royal’ label after deciding to step down as working royals.

Her Majesty and senior officials are said to have agreed it is no longer tenable for the couple to keep the word ‘royal’ in their ‘branding’.

Harry and Meghan spent tens of thousands of pounds on a Sussex Royal website to complement their hugely popular Instagram feed.

They also sought to register Sussex Royal as a global trademark for a range of items and activities, including clothing, stationery, books and teaching materials. In addition, they took steps to set up a new charitable organisation: Sussex Royal, The Foundation of the Duke and Duchess of Sussex.

But they were later forced to accept defeat and changed to Archewell.

Harry and Meghan first began using the Sussex Royal branding in 2019, after they split their household from that of the Duke and Duchess of Cambridge – known as Kensington Royal.

Dozens of trademark applications were made for everything from bandanas to notebooks – although sources have always stressed that these were preventative measures to protect the trademark from others, and never intended for commercial use.

It placed the Queen in an invidious position, given her long-held conviction of refusing to allow working members of the family to profit from their positions.

If Harry keeps true to his pledge, their daughter will be their last child. He told activist and chimpanzee expert Jane Goodall in 2019 that he would only have two children for the sake of the planet